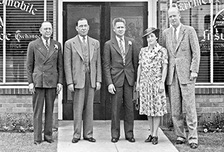 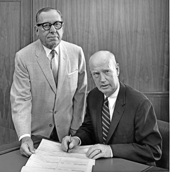 On March 28, 1928, 90 years ago today, Farmers Automobile Inter-Insurance Exchange was born and on April 9th, sold its first auto policy on a 1925 Cadillac Phaeton to Charles Briscoe. This was the beginning of a wonderful Corporate story that has had tremendous positive impact on many individuals; employees, agents, district managers, and of course, the many customers that have had their lives saved from financial ruin through the products purchased through the Farmers Group of Companies through the years. I have been blessed in that I have met many wonderful people during my association with Farmers, both fellow employees, fellow district managers and fellow agents, not to mention the many wonderful customers that I am privileged to serve.

I began my career in the Home Office located at 4680 Wilshire Boulevard in the In Plant Printing department in 1977. From there I went to the Sales Department with positions as Sales Statistical Clerk, Sales Materials Coordinator and Sales Statistical Specialist. Bob Winton and Jim Pattenson were my bosses for the positions in Sales. Not only were they mentors of mine, but also became very close personal friends! During my tenure in Home Office Sales we had two Vice President’s of Sales, George Seebart and Bim Braddock; two of the finest gentlemen anyone would ever wish to meet and each taught me quite a bit about leadership! In 1983, the Regional Sales Manager in the Simi Regional Office, Stan Bergstrom, promoted me to Sales Administration Manager in the Simi Regional Office. Later that year I was promoted to Division Agency Manager in what was at that time known as the Central Division, which we soon changed to the Saleblazers Division. Stan was yet another boss who I had great respect for and developed a strong friendship with that lasted throughout the years. During my tenure at the Simi Regional Office we had two Vice President – Regional Manager’s in Paul Whealen and John Schock and again wonderful mentors, individuals and friends.

In 1984, I left employment of the Company and went to work for Ron Wheat as his District Manager Recruiting and Training Assistant. Ron taught me about working with agents, developing mutual respect with them and how to properly train so that they were as effective as possible when working with the client making coverage recommendations. I developed a deep respect and friendship with Ron and would be remiss if I didn’t mention his dad Bob with whom Ron shared an office for the beginning of my tenure with him. The two of them together were quite a team. In 1987 Stan Bergstrom and John Schock offered me a position as a District Manager in the Simi Valley area. I served 18 years in this position enjoying recruiting new agents and training them in the business of insurance. In 2005 I decided that it was time for a change and opened an agency for myself and have been building up a clientele ever since.

I mention the names of those that were instrumental in my career development but there are many, many more that have made a significant impact on my personal and professional life. People like Charlie Smith, Morry Samuels and Dave Malone who treated me so well during my first business trip to the Santa Ana Regional Office, my dear friends Jim & Bobbie Colclaser who through the years have treated me like family, Home Office friends and co workers Jack Wong, Brian Smith, Lorraine Gimlin, Bob Mobeck, Doug Onyon, Larnie Rowlett, Rick Wright. Donna Lilly, Patti Murphy Pattenson, Mike Bigley and Jerry Faulwell. Regional Office co workers and friends Shirley Johnson, Syd Thoreson, Clarence Mann, Cam McCluskey, George Gueperoux, Arnold Owen, Chuck Roberts, Will Hawkinson, Daryl Hubbard, Jim Jacobs, Paul Quinn, Marita Faulwell, Steve & Donna Mace, Lee Gay Wilk, Cathy Benaway and many, many more, too many to name. To everyone whose path I have crossed in the last forty years, you have made my life special and I thank you! Happy Birthday Farmers! If you have a story about your relationship with Farmers and want to share, please by all means post it on this blog as a tribute to Thomas Leavey and John Tyler!

Auto insurance rates on the rise

Are you taking care of tomorrow?

Auto insurance rates on the rise

Are you taking care of tomorrow?

Comments about annuities from the current issue of Kiplinger newsletter –

Prevention through education – talk with your teenage drivers

Did you know that 44% of small businesses reported being a victim of a Cyber Attack?

You, disabled? What are your chances?